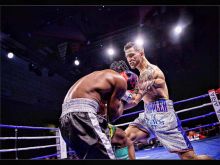 Saturday September 30th 2017 in Peterborough Ontario at the Peterborough Memorial Center with another full house was nothing short of just an electrifying night of Professional Boxing as Cody ( The Crippler ) Crowley defended his C.P.B.C. International light middleweight title with a 6th round TKO of Jamaican Richard ( The Frog ) Holmes who could not come out to continue fighting. Until that moment the fight was very exciting and and action packed but the Crippler showed he was to fast and to strong for his opponent. The show was also lined up with a amazing under card that left fans on the edge of their seat. There was not a dull moment from the first round of the first bout to the last round of the main event. Another great show put on by the promoters that fans will be asking and waiting patiently for the next one.