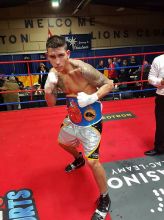 On December 2nd Donny Brooks Promotions featured a five bout card in Moncton N.B. that saw lot's of good action and the changing of the Canadian Middle-Weight title from one Champion to a new Champion.
The Champion Adam (the green machine) Green would defend his title against a younger fighter by the name of Nathan (the timberwolf) Millier. The fight started well for the first few rounds but the younger stronger Millier proved to be to much and to strong for Adam Green, with the fight being stopped at the early mark of round 7 and Nathan Millier becomes the new C.P.B.C. Canadian Middle-Weight Champion via 7th round tko.