October 19th 2019 in Peterborough Ontario was the place to be for a show that was nothing short of spectacular. Cody (The Crippler) Crowley 17 and 0 would take on Mian Hussain 16 and 1 and a debut on the UFC Fight Pass live to 140 countries across the world and a packed Peterborough Memorial Center with screaming fans. The show began with an exciting undercard as two promising heavyweights looked impressive.
Moses Johnson and Patrick Mailata both took wins, then Lucas Bahdi improved his record to 6 wins with 6 ko,s..The womans bout showed to be very exciting and kept fans on edge as Jessica (The Cobra) Camara took on Beatrice Adriana Jimenez it was a war between both fighters with Jessica winning the bout via unanimous decision. Then WBC Continental America Champion Tony Luis put on a spectacular boxing show for the fans and winning a unanimous decision over a very game Ricardo Lara. As 3 times C.P.B.C. Champion Cody Crowley made his way to the ring the crowd went wild with support for their Champion and The Crippler did not leave any doubts why hes 17 and 0. The bout started fast and after the 3rd round Mian Hussain seemed to had gone into survival mode. Cody Crowley kept pressing the action and moving forward and at the end Cody had won all 10 rounds and bringing his record to 18 and 0. Predictions are that Cody Crowley will fight for a world title sometimes in 2020 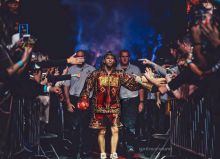