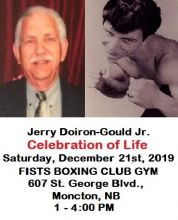 The boxing world lost another icon December 12th as Jerry Doiron Gould Jr. left this world after being ill for some time. Jerry was a force in Canadian Boxing for many years serving a few terms as president of the Canadian Professional Boxing Federation and also served many years as chairman of the Moncton Boxing and Wrestling Commission. Jerry was the older brother of the fighting Doiron Family and will be missed by all who knew him. Condolences to the Doiron Family and to Jerry's wife Carol Mercer Doiron. RIP Jerry