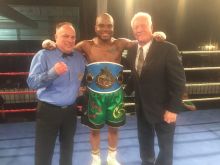 The C.P.B.C. was in Saskatoon this weekend February 27th 2016 for the C.P.B.C. Canadian Super Middleweight title fight between home town fighter Paul Bzdel and Shakeel Phinn from Montreal Quebec. The show was promoted by Page Promotions (Denis Page) was almost sold out and was the first pro show in Saskatoon in almost two decades. A great under card got things going with pro debut Ken Huber (named Heavy Hands) ended the bout after the 3rd round as his opponent Clay Dumas from Saskatoon could not come out for the 4th round due to a badly swollen left eye and badly hurt to the body,giving Ken Huber a 3rd round TKO on his pro debut. In a 6 rounder Noel Harding of Brandon Manitoba won a unanimous decision against a game Lee Laquette. Watch for more of Noel Harding in the near future.

In the main event, Saskatoon's Paul Bzdel fought a hard 10 round fight against Shakeel Phinn of Montreal Quebec for the C.P.B.C Canadian Super Middleweight Title. It was an action fight from start to finish as it always is with Paul Bzdel. This guy is such a warrior, but sadly coming up short and Shakeel Phinn winning the bout on a unanimous decision and becoming the new C.P.B.C. Canadian Super Middleweight Champion.