On Thursday night at Casino Montreal in front of a sold out crowd Promoted by GYM former 2 time Canadian became a 3 time Canadian Champion by stopping a very game Eric Barrack with a 3 rd round KO and claim the C.P.B.C. Canadian Heavyweight Championship. The fight was not boring for one second and exciting right till the end. This was the co-main event of the night with rising start Custio Clayton fighting the main event of the night that did not leave anyone dissapointed. It was none stop action from begining to end,with Custio winning by way of TKO.The show also had a great undercard and featuring another rising start in the women's division Marie Eve Dicaire with her 3rd professional win entering the C.P.B.C. Canadian Rankings. 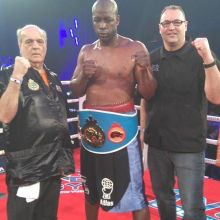